If we look at the theory of A Level Computer Science, it teaches how the computer works and can include binary data structure and what makes up the data consisting of pictures, text, and numbers. Basically, the theory part covers all there is to the computers, such as how data is accessed, different computer parts, and so on.

Requirements for A Level Computer Science

Many people get confused that they would need to do computer science at the IGCSE level. In reality, it is not a requirement at all, but it will surely help during the A Level Computer Science course.

As the name implies, the major portion of this course includes programming elements – So it would surely get easier for those who have a slight experience in programming before. With that confusion out of the way, let’s look at the minimum requirements for this course:

A minimum B-grade in mathematics is required

Other than that, having additional skills such as logical thinking, problem-solving, and a liking to mathematics will help a lot during the course.

A Level Computer Science – Where can it lead?

Once you have finished the A-level computer science, you would have various interesting fields to work in or even for further study.  Computer science can further lead to machine learning, networking, and artificial intelligence (AI), robotics, big data processing, cloud computing, game development, or even teaching.

Just look at the world around us, and you would see computers doing their magic to power our modern world. The actual fields for work and further study after computer science are really massive. If we look at most of the developing countries, the usage of computers is also increasing at a fast rate. This means that your computer science skills can prove to be portable as well.

Amongst all the other benefits of A Level Computer Science, it will give you a good knowledge about English speaking and programming in one package. I mean, look at any programming language, and you will notice that it is based on the English language. That’s why choosing a good language that gives you a good foundation of English along with Computer Science can prove to be much more beneficial.

If we talk about the job prospects, there are many different fields to take, as mentioned above. The IT sector is growing at a rapid rate all over the world which means strong demand for computer skills in the future. 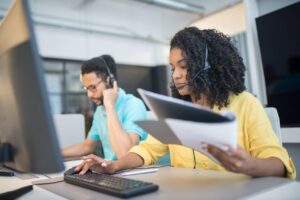